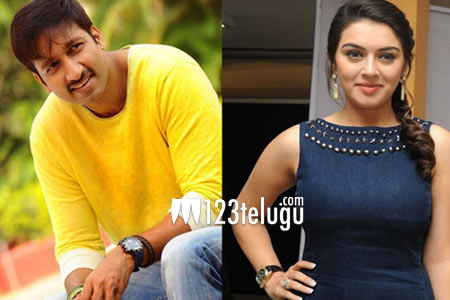 After wrapping up a stunning sky-diving sequence recently in Dubai, Gopichand is now busy shooting a song, along with Hansika, for his forthcoming film ‘Gautham Nanda’. Directed by Sampath Nandi, the film also stars Catherine Tresa in a lead role.

Hansika, who recently flew to UAE to join the team, took to Twitter saying, “Wrapping up the song in the most cool manner ! Love the track @MusicThaman ! With @DirectorSampath and Gopi 😇 .” The songs in the film will also be shot in Dubai at the iconic Burj Khalifa and Burj Al Arab towers.

The film’s shoot is nearing completion and it’ll be ready for release later this year.