Gopichand teams up with his favorite director
Published on Jun 7, 2015 9:35 am IST 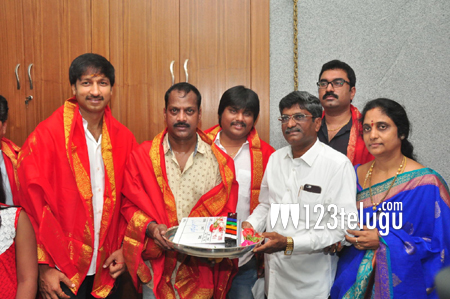 Released in 2005, Gopichand’s action entertainer Yagnam was a blockbuster and turned him into a bankable mass hero. The film’s director was AS Ravi Kumar Chowdary and this blockbuster combination has materialized once again after exactly a decade.

Yesterday, Gopichand’s next in Ravi Kumar Chowdary’s direction has been launched and the actor-director duo expressed their happiness for joining hands once again for an out and out mass entertainer. The film will be produced by Bhavya Creations, the banner which earlier produced the superhit Loukyam.

Star writers Kona Venkat and Gopi Mohan are penning the story while Sreedhar Seepana will be writing his trademark dialogues. Prasad Murella is the cinematographer while Anup Rubens will compose the tunes.