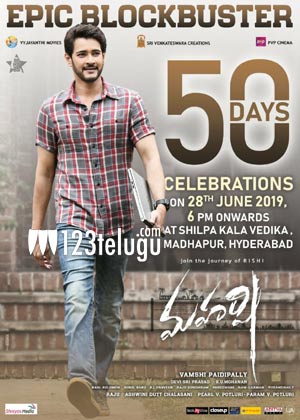 Superstar Mahesh Babu’s silver jubilee film, Maharshi, released on May 9 and received mixed reviews. However, Mahesh’s star power and the summer holiday advantage helped the film to end up not only as the biggest blockbuster in the actor’s career but also the 4th all-time highest grossing Telugu movie by collecting nearly Rs 103 crore share.

Maharshi is all set to complete its 50 day run in as many as 200 screens across the twin Telugu states. To celebrate this humongous success, the film’s makers are going to organize a grand event on the 28th of June at Shilpa Kala Vedika. The film’s entire unit, several Tollywood celebs and thousands of fans will be celebrating the success together.