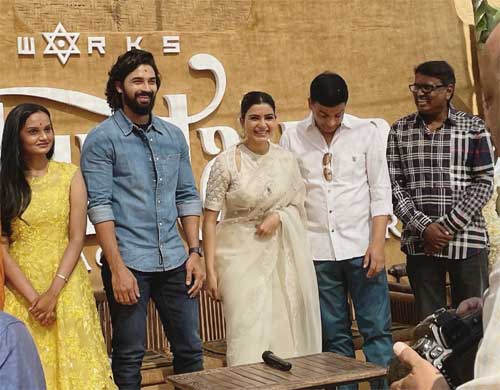 Shaakuntalam was formally kick-started, with veteran producer Allu Aravind sounding the clap and Dil Raju switching on the camera. Interestingly, Dil Raju is presenting the movie under his Dil Raju Productions (DRP) banner in association with Gunasekhar’s Gunaa Teamworks banner.

Speaking at the launch, Gunasekhar said that a tasteful producer like Dil Raju backing his vision will take Shaakuntalam to the next level. “I was looking for an actress with elegance and sophistication and Samantha’s name was suggested by everyone. She is an extremely dedicated actress and is thoroughly involved in the pre-production formalities to prepare for her role. We are fortunate to have found our Dushyant in Dev Mohan,” Gunasekhar said.

Speaking on the occasion, Dil Raju said that when he heard Gunasekhar was making Shaakuntalam, he wondered why Gunasekhar was again producing such a humongous project. “I wanted to support his vision. I first listened to the script and imagined Samantha as envisioned by Gunasekhar garu,” the star producer said.

Lead actress Samantha said that she is happy that her long-pending dream of acting in a periodical film will be fulfilled with Shaakuntalam. Sam further revealed her excitement on teaming up with a passionate filmmaker like Gunasekhar. Dev Mohan expressed his happiness on debuting in Tollywood with a film like Shaakuntalam. Gunasekhar’s daughter Neelima Guna is turning producer with this ambitious poetic romance drama which will hit screens in 2022.