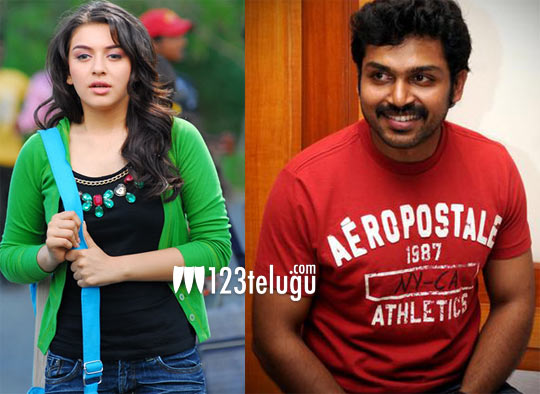 Richa’s loss is Hansika’s gain. Yes, the bubbly actress has replaced Richa Gangopadhyay in Karthi’s upcoming Tamil film titled Biriyani. Venkat Prabhu is going to direct the film. Initially, Richa was supposed to play the lead role; however, just before the film goes on floors, she has been replaced with Hansika. “Wow! I don’t I need2break D news ny more:)yes I’m very much confirming d news, i hv signed sundarC’s sir movie Theeya velai seiyyanum kumaru and mr.venkat prabhu sir’s Biriyani .. Supa 2013 is gona be an entertaining year for u and me 😉 cheers,” Hansika tweeted confirming her presence in Biryani. This is the first time Karthi is going to team up with Hansika, who’s already one of the most sought after actresses in Tamil. She’s currently shooting for Suriya starrer Singham 2 and two more Tamil films with Simbu – Vettai Mannan and Vaalu are lined for release early next year.