Have a strong resolve and God will change your fate: Sharwa recollects Chiranjeevi’s words
Published on Mar 9, 2021 8:01 am IST 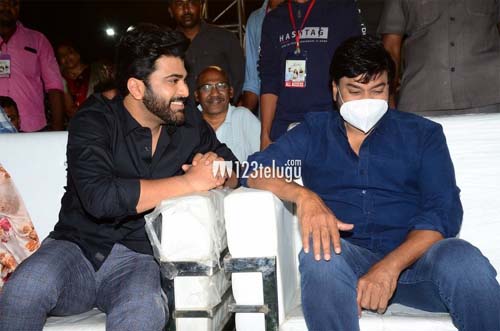 Hero Sharwanand recollected his bond with Megastar Chiranjeevi and Ram Charan during his speech at Sreekaram’s pre-release event that was held last night in Khammam. Sharwa said that it was Chiranjeevi who wrote Sreekaram for his successful journey as an actor with his debut film Shankar Dada MBBS’ success.

Sharwa went on to recollect Chiru’s golden words – “God will change your fate if your resolve is strong,” Chiru sir told me and I’m following his words till date,” Sharwa said. The talented hero went on to thank his good friend Ram Charan for calling him after watching Sreekaram’s trailer and promising him to promote such an important film.

Sreekaram features young beauty Priyanka Arul Mohan as the female lead. This Kishor directorial has been bankrolled by Ram and Gopi Achanta under 14 Reels Plus banner. The film is scheduled to hit screens on March 11.