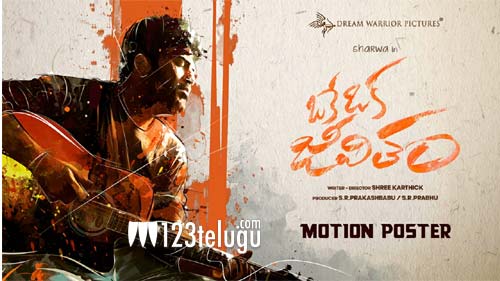 The sneak peak from Sharwanand and Ritu Varma’s upcoming Tamil-Telugu bilingual sci-fi drama, Oke Oka Jeevitham, has been released just a while ago. The motion poster offers an intriguing glimpse into the life of the male protagonist Adhi, played by Sharwa.

The motion poster seems to be set in an event and has a female voice motivating Adhi to sing and audiences mocking Adhi for being silent. The poster then shows a music system and then a few sci-fi elements. The poster ends with Sharwa playing a guitar.

Debutant Shree Karthick is direction Oke Oka Jeevitham and SR Prakash Babu and SR Prabhu are bankrolling it under Dream Warrior Pictures banner. Tharun Bhascker has penned the dialogues for the film. Amala Akkineni is essaying an important role in the movie. Oke Oka Jeevitham has its music composed by Jakes Bejoy. The film’s release date will be announced soon.