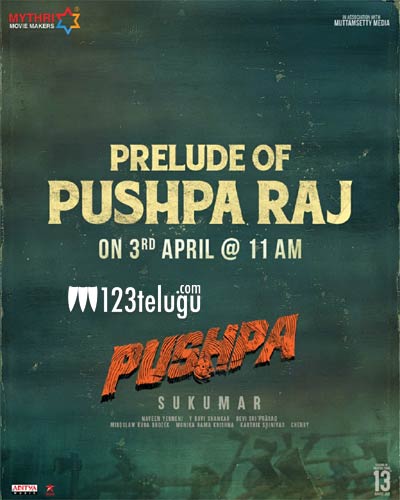 Here is the most eagerly awaited update on Allu Arjun and Sukumar’s action drama, Pushpa. The Prelude of Pushpa Raj will be out tomorrow (April 3rd) at 11 AM. This could be a short teaser for the full single that’ll be releasing on a further date.

Pushpa has wrapped up crucial schedules in the deep jungles of Kerala and Maredumilli and the picturesque Tenkasi village in Tamil Nadu. The film is slated for release on August 13. DSP is the film’s music composer and his collaboration with Sukumar never went wrong so far. Naturally, expectations on the film’s audio album are quite high among fans.

Rashmika Mandanna is the leading lady in Pushpa. The film is being bankrolled under Mythri Movie Makers banner in association with Muttamsetty Media banner. Stay tuned for the big surprise tomorrow.