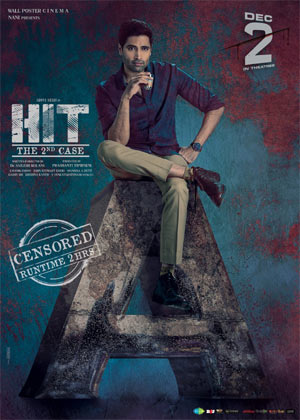 Tollywood has got some finest thrillers, and the majority of those films are done by Adivi Sesh. He is now back with another investigative thriller, HIT 2, which has good hype around it. The movie unit is promoting the film nicely, and the film is all set to give thrills from December 2nd.

The latest word is that the censor board gave an A certificate to the film. This news has given more excitement to the audience as they feel they will experience a solid crime thriller without any restraints. One can understand the same going by the teaser of the film.

Also, it was informed by the team that the movie’s length is 2 hours which is very crisp for a thriller. Meenakshi Chaudhary is playing the leading lady, and Sailesh Kolanu is directing the sequel. Prashanti Tipirneni is producing the film, and Natural star Nani is the presenter.