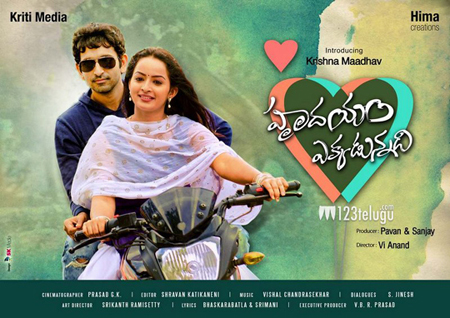 Young hero Krishna Madhav, relative of Superstar Mahesh Babu is making his debut in upcoming romantic entertainer ‘Hrudayam Ekkadunnadi’. All the post production formalities have been completed, and the film has been awarded an U/A certificate by the censor. The film is carrying a positive buzz, and even the censor members seemed to have liked the film

V I Anand is the director, and Pavan and Sanjay produce this film jointly on Kriti Media and Hema Creations. Newcomers Sanskriti and Anusha will be paired up opposite Krishna Madhav. ‘Hrudayam Ekkadunnadi’ is set to hit the screens on March 15th.