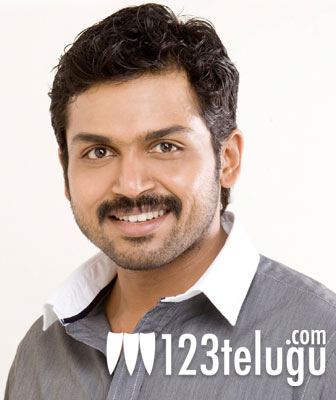 Karthi is one of the few Tamil actors who has a good fan base in Andhra Pradesh. Except for Malligadu and Saguni, three of his films were very well received after they were dubbed in Telugu. In fact, he makes it a point his own voice for all his films and he has impressed quite a few with his ability to speak Telugu within a short span of time. In a recent interview, he said, “I may not have acted in a straight Telugu film, but I dub on my own for all my films. Besides, Hyderabad is like my second home. I spend a lot of time here and quite a few films of mine are shot here.”

This year, he’ll be seen in Venkat Prabhu’s Biriyani and M Rajesh’s All in All Azhagu Raja. Venkat Prabhu’s Biriyani is going to be dubbed in Telugu and it also stars Hansika, Premgi Amaren and Mandy Tahkar. The film’s shooting is almost 50 per cent complete and the entire team will be in Hyderabad for couple of weeks from March 31 onwards for a major schedule. On the other hand, Karthi will be romancing Kajal Aggarwal in All in All Azhagu Raja and most part of that film is being shot in southern Tamil Nadu and Chennai.