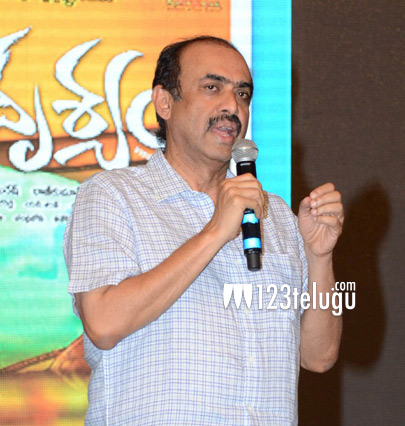 It is fine marriage of script, screenplay and drama as every situation in the film provides the viewer with a unique experience each time.

Producer Suresh Babu is very upbeat about Drishyam and believes it is not only an unusual concept but also brings in a new perspective to theater entertainment. He also said that in Drishyam, Venkatesh took the challenge to move out of his comfort zone to add new dimension to his acting excellence.

A trailblazer Telugu movie businessman, Suresh Babu has always been ahead of the curve with the path breaking films like ‘Eega’ and ‘Uyyala Jhampala’. Now he wants to carve another niche with #Drishyam in Telugu Cinema. He has helped launch the career of many stars and his impact on Telugu movie industry has been rather wide ranging.

“If you take a closer look at our 50 years of Suresh Productions, we have shown an ability to challenge new ways in film making and also handle multiple genres and themes.” says Daggubati Suresh Babu whose production house is celebrating 50 years in cinema with Drishyam.

Talking about the #Drishyam hero Victory Venkatesh, Suresh Babu says he’s blazing a whole new trail. As an actor he’s shown greater acumen than many realize. He tapped the right opportunities early in his career to make a great impact, judging by how each of his performances turned out to be hits at the box office. He knows his strengths and excels in them very well.

Drishyam is a bold new step in his career and he is absolutely confident that it will connect with cinegoers, Suresh Babu added. He also said the reel chemistry between the movies lead stars Venkatesh and Meena will rekindle their yester year magic.

Produced by Suresh Productions and Rajkumar Theatres, the film features Meena opposite Venkatesh and Nadiya in a unique role.