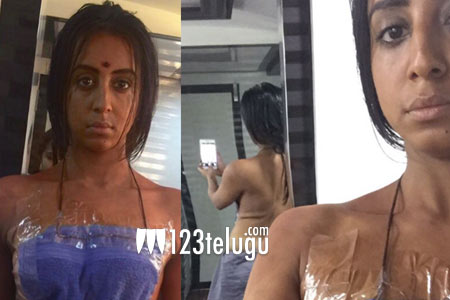 Yesterday, the social media was abuzz with snaps from the latest Kannada release Dandu Palayam. Young actress Sanjana was seen posing backless in a crucial scene where she gets molested.

The snaps were a bit morphed and were showcased as if Sanjanna was totally nude. Some got it very wrong and were hurling abuses at the actress. This gave the film some free publicity as well.

But Sanjanna was a bit upset in the way the scene was projected in the film. So taking claim of the situation, she revealed that she did give a bold shot but she was not nude.

She also revealed some pics where she was covered from the front. Dandu Palayam 2 has already in Karnataka with some good openings all over. The Telugu release will happen tomorrow.