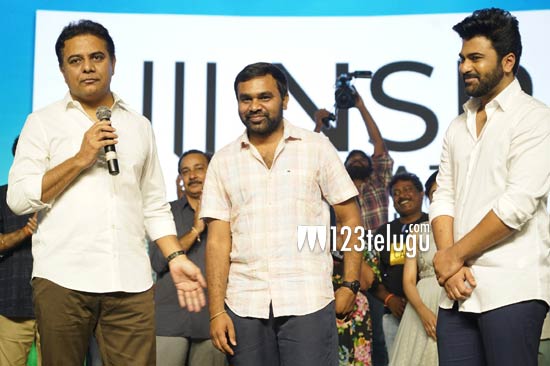 Telangana state minister KTR was the chief guest at the pre-release event of Sharwanand’s Sreekaram that was held tonight in Hyderabad. Speaking at the event, KTR said that he has watched a 9 minute video of Sreekaram and felt that it’s an important film made with a lot of heart.

“There’s a saying that the land that makes an ox and a farmer cry will never flourish. Vyavasaayam (agriculture) has both vyayam (expenditure) and saayam (help). In today’s agriculture, there’s a lot of expenditure and less help. Agriculture nowadays has become a huge burden on farmers,” KTR said.

KTR also announced that he will try his best to ensure Sreekaram gets entertainment tax exemption in Telangana. “I also request the audience to do their bit and encourage the movie and its makers by watching it only in cinemas and not in pirated prints,” the minister said, as he went on to wish the entire team on the film’s Friday release.

Sreekaram also features Priyanka Arul Mohan, Rao Ramesh and Sai Kumar in key roles. This Kishor directorial has been produced by Ram and Gopi Achanta. The film is hitting screens on March 11.