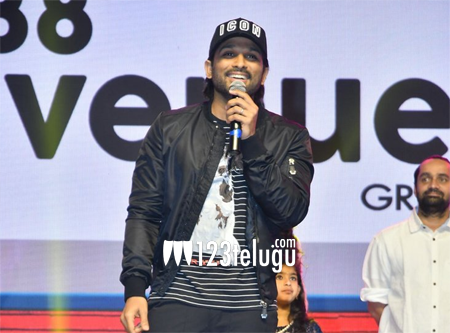 Hero Allu Arjun was the special guest at the pre-release event of Sharwanand and Sai Pallavi’s soon-to-release romantic drama, Padi Padi Leche Manasu. Speaking at the event, the Stylish Star had some nice things to say about the film and its cast and crew.

Allu Arjun said that he has become a huge fan of PPLM’s title track and the theatrical trailer. He said that he has always enjoyed the romantic tracks conceived by the film’s director Hanu Raghavapudi in all his previous movies. Bunny further said that he is very sure about the film’s success and also congratulation debutant producer Sudhakar Cherukuri.