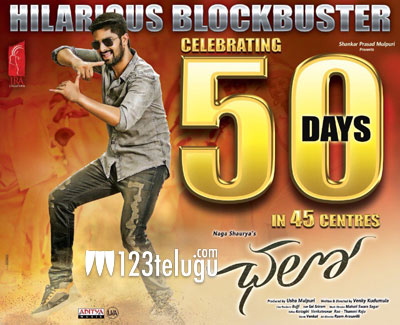 Naga Shaurya and Kannada actress Rashmika Mandanna’s romantic entertainer, Chalo, was a solid hit in the twin Telugu states and in the US. The film, produced by Naga Shaurya’s parents, went on to collect over 12 crores. Debut director Venky Kudumula impressed everyone with a hilarious plot.

Tomorrow, Chalo completes its 50-day theatrical run in 45 centres across AP and Telangana. Considering that most films end their theatrical run within a month of their release, it is indeed a remarkable feat by this small film. Chalo gave the much needed hit for Naga Shaurya, while it also gave a great start to Rashmika and Venky Kudumula’s careers in Tollywood.