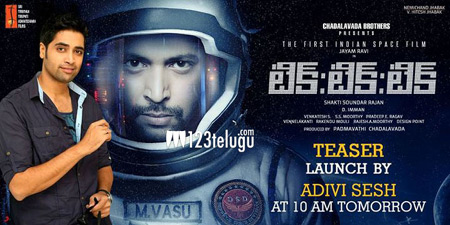 Jayam Ravi starrer Tik Tik Tik has become one of the most talked about films in Tamil Cinema these days. Directed by Shakti Soundar Rajan, the film stars Jayam Ravi as an escape artiste and a magician, who is sent on a special rescue mission to space. Nivetha Pethuraj and Aroon Aziz are playing other important roles.

D Imman has scored the music and the entire VFX of the film was done by a studio based in Chennai. The Tamil version is slated for release as a Republic Day special, and it remains to be seen when the Telugu version will hit the screens.