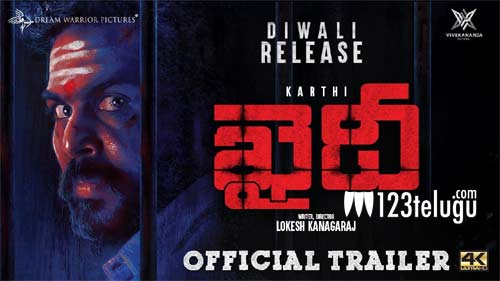 Hero Karthi’s upcoming action thriller, Khaidi, has been making all the right noises ever since it was launched earlier this year. The film is slated for release this Diwali season. Interestingly, Khaidi does not feature a heroine or any songs.
Khaidi’s much-awaited theatrical trailer was unveiled today and it strikes a solid impact instantly with its intense and action-packed backdrop. Karthi plays an out-and-out mass role this time around and he shines with his subtle histrionics and enraged character. There is also an emotional father-daughter track that may strike a chord with audiences.

Khaidi is directed by Maanagaram fame Lokesh Kanagaraj. The film is jointly produced by Dream Warrior Pictures and Vivekandanda Pictures. Sam CS is the music composer.