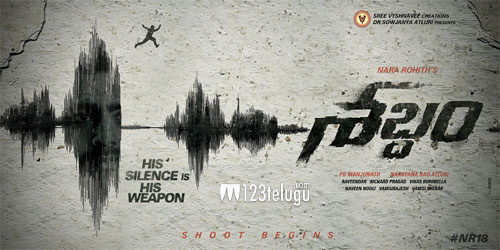 Recently, we reported that hero Nara Rohith signed a film in which he will be playing the role of a mute person for the first time in his career. This is Nara Rohith’s 18th project and the film’s formal launch event will be taking place at Amaravati this morning, on the occasion of Ugadi.

As per the latest update from the makers, NR18 has been titled Shabdham, with an interesting tagline “His silence is his Strength”. The film’s shooting will commence today. PB Manjunath will be directing the movie and Narayana Rao Atluri will produce it under Sree Vyshnavee Creations banner. Dr. Sowjanya Atluri presents Shabdham.