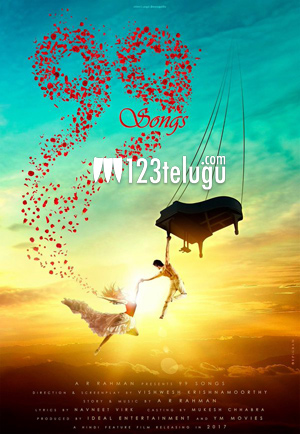 We had long back reported that Oscar winning music composer AR Rahman will be donning the producer’s hat with a film titled 99 Songs under is YM Movies banner. This evening, Rahman took to his Twitter profile to release the first look poster of his debut production.

Rahman tweeted, “With your support & good wishes, I’m pleased to share my movie’s first poster!” The poster looks quite intriguing and looks like the film is a romantic and fantasical musical saga. Interestingly, Rahman even wrote the film’s script, apart from producing and scoring for it.

More details regarding the film’s cast and crew will be revealed soon. Vishwesh Krishnamoorthy is the film’s director. 99 Songs will be released in early 2017.