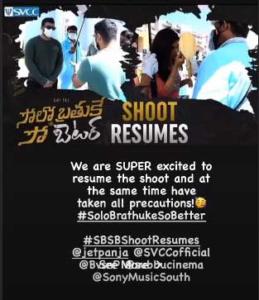 Finally, after over 5 months since lockdown, the makers of sai Dharam Tej and Nabha Natesh’s upcoming romantic entertainer, Solo Brathuke So Better, resumed the shooting this morning. Nabha took to Instagram and shared a few working stills from the set in RFC.

The iSmart Shankar girl said that she and her team are super excited to be resuming the shoot. She also revealed that the unit is taking all the safety measures on the set to protect the crew from Novel Coronavirus.

The two singles that have been released from SBSB’s audio album so far have been well-received by fans. Directed by debutant Subbu, the film is being produced by senior producer BVSN Prasad. Thaman is the music composer.