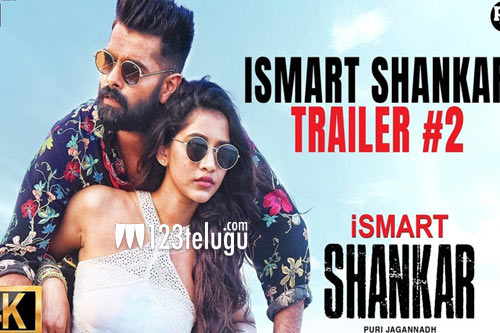 Puri Jagannadh and Ram’s iSmart Shankar is exactly a week away from hitting theaters. To take the hype to the next level, the film’s trailer 2 was launched just a while ago. Like it’s predecessor, the trailer 2 too is loud and assures an out-and-out mad-caper.

Ram has tried out the Hyderabadi slang and body language for his tapori role in the movie. In addition to Ram’s energy, the film’s young heroines, Nidhhi Agerwal and Nabha Natesh, further add some more zing and eye candy. The main plot point, where a microchip is installed in Ram’s brain, raises curiosity.

A lot is expected from Puri Jagannadh, who has been going through some tough times for the last few years. Charmme is the film’s co-producer and Manisharma is the music composer. iSmart Shankar is releasing on July 18.