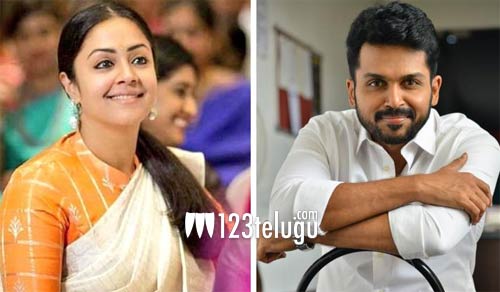 Popular actress Jyothika and her brother-in-law Karthi are all set to team up for a new Tamil film, as per the latest grapevine in Kollywood. To be directed by ‘Drishyam’ fame Jeethu Joseph, buzz is that Jyothika and Karthi will be playing siblings in this untitled film.

For the past several years, there have been a lot of queries about when Suriya is going to work with his brother. While both Suriya and Karthi have been waiting for the right script to team up, it looks like Jeethu Joseph has pulled off a casting coup by roping in Jyothika and Karthi for this film. Jyothika’s brother Suraj and Viacom 18 are going to produce this film.

Meanwhile, Jyothika is busy filming a comedy film which is being directed by Kalyaan, and Karthi is awaiting the release of Khaidi, which has been directed by Lokesh. He also has Mani Ratnam’s magnum opus, Ponniyin Selvan lined up later this year.