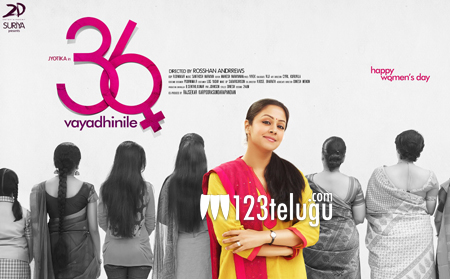 One of the popular actresses until the mid 2000’s, Jyotika is returning to silver screen after a 5 year long sabbatical. The actress who is popular among the Telugu audiences for the blockbusters like ‘Tagore’ and ‘Mass’, married Tamil superstar Suriya in 2006 and quit acting in 2009.

Jo, as she is lovingly called by her fans, is now ready with a women-centric film titled ‘36 Vayadhinile’. On the eve of women’s day, actor Suriya joined Twitter and unveiled the first look stills of ‘36 Vayadhinile’. The film is directed by Rosshan Andrrews and it is an official remake of the director’s Malayalam hit drama, ‘How Old Are You’.

The film is produced by Suriya himself on his newly established production house 2D Entertainment. The film will be released this summer.