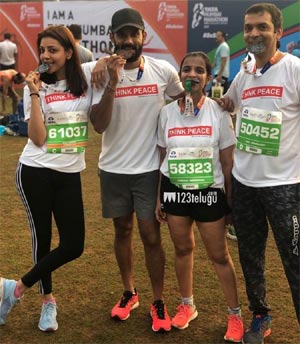 Few weeks ago, we had reported that Kajal Aggarwal has been working closely with Think Peace, an NGO, to raise funds for some of their key initiatives in Araku valley. The actress has been raising funds to build a school and take care of education of the tribal kids as part of Think Peace’s social outreach program.

For the second year in a row, the actress decided to run a marathon in Mumbai to raise funds for this organization. And earlier today, she kept her promise, and also revealed that she ran the marathon in less time, despite putting in less effort, compared to her previous attempt.

Meanwhile, the actress is gearing up to join the sets of Indian 2, which is being directed by Shankar. In Telugu, she will next be seen in Teja’s upcoming film, which has been reportedly titled as Sita.

My second Mumbai Marathon. Finished 10kms in 70 mins. 8 mins lesser than last year with 1/4th the training. Now need to focus on upping goals, endurance, fitness levels and the game for… https://t.co/KtZXa5YQri