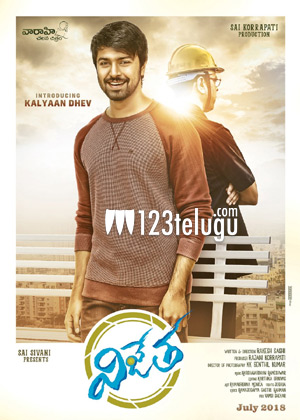 The makers of Megastar Chiranjeevi’s son-in-law Kalyaan Dhev’s maiden film, Vijetha, unveiled the film’s first look poster just a while ago. The makers also announced that the film will be hitting the screens in July. An exact date of release will be revealed soon.

Vijetha is an emotional drama between a son and his father. Yevade Subramanyam girl Malavika Nair is the film’s heroine and Rakesh Sashi is the director. Vijetha is being produced by Sai Korrapati under Vaaraahi Chalana Chitram banner. The film’s shoot was wrapped up recently and the post-production work is underway at the moment.