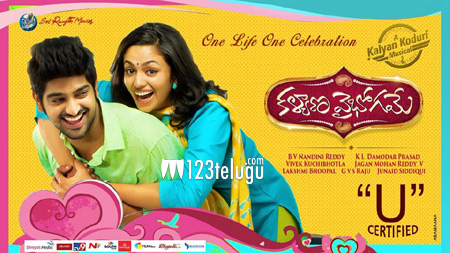 The platinum disc function of the romantic entertainer ‘Kalyana Vaibhogame’ will be held tomorrow at a posh hotel in Hyderabad. The event will be attended by a number of celebrities along with the team of Kalyana Vaibhogame.

Kalyana Vaibhogame’s audio album was composed by Kalyan Koduri and the audio has come in for good praise. The movie is running well and it has earned good acclaim from both critics as well as movie lovers.

KV is a coming of age love story that has been directed by Nandini Reddy and Damodar Prasad has produced the film on Ranjith Movies banner. Naga Shourya and Malavika have played the lead roles in the movie.