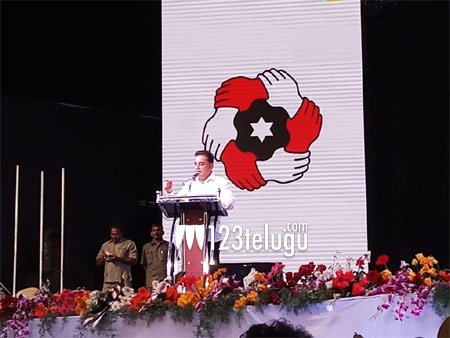 Stalwart Tamil actor Kamal Haasan, who has taken the plunge into active politics, has announced the name of his political party in Madurai this evening. Kamal’s party is named Makkal Needhi Maiam, meaning People’s Justice Center.

Addressing thousands of his cheering fans and locals, Kamal said that he is only a tool in politics and that the real leaders are the common people. Explaining the meaning of his party’s name, Kamal said, “People ask me what is this ‘Maiam?’, and if I am Left or Right? That is why I kept the name ‘Maiam’, which means centre. Six hands in my party symbol represent six states, star in the middle represents the people.”

Kamal said that everyone should collectively be a role model in carrying out corrupt-free politics in the state. He also announced the district secretaries of his party.