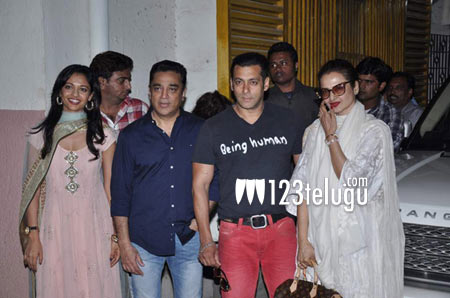 As Kamal Haasan is fighting hard to get his Tamil version of his latest film Vishwaroopam, he has gone ahead and released the Hindi version yesterday. Speaking to the press, Kamal specially thanked the Bollywood media for promoting his film through think and thin.

He also arranged a special screening for good friends Salman Khan, Rekha and other big wigs of the industry. The response has been great, and north Indian audience have accepted this film which has been made on par with Hollywood standards. Vishwaroop also stars Pooja Kumar, Rahul Bose and Shekhar Kapur