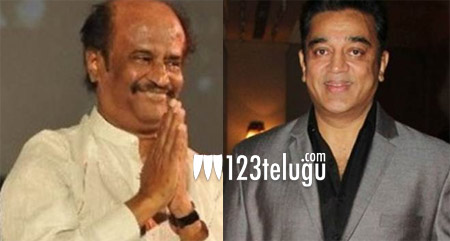 The friendship between legendary Tamil stars Kamal Haasan and Rajinikanth dates back to over 40 years. In fact, Rajini had made his acting debut with Kamal’s Apoorva Raagangal in 1975. Since them, both the stalwarts were prime competitors and yet maintained a healthy relationship all these years, which is quite rare in the film industry.

Yesterday, the Andhra Pradesh government honored both these acting giants by choosing them for the prestigious NTR National Award for the years 2014 and 2016 respectively. After thanking the AP government via a tweet, Kamal also congratulated his good friend Rajini. In turn, Rajini thanked Kamal and congratulated him back. The star heroes have set an example yet again with their camaraderie and this has become a talking point among their fans since last night.

Congratulations, Superstar.Rajinikanth for the NTR National award in 2016. Thank you Andhra for honouring me also, yet again. I am indebted to your continued support, which started early in my career. Kruthagnyathalu

Thankyou Kamal… I wish you the same !!! Congratulations!