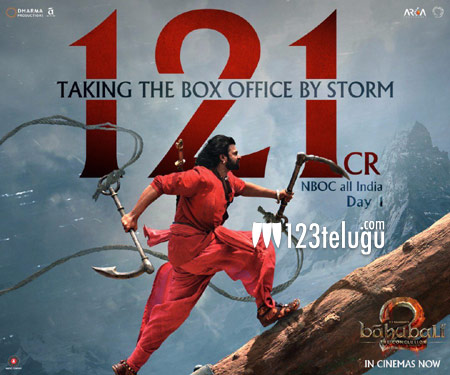 SS Rajamouli’s sensational magnum opus, Baahubali The Conclusion, is taking the entire country by storm. The film has wiped out all the existing records​ across the country and is giving tough competition to Hollywood biggies in the US.

Meanwhile, several unofficial and inflated figures of Baahubali’s day one collections have been doing the rounds on social media. Giving the much needed clarification, hotshot Bollywood filmmaker Karan Johar took to Twitter and revealed the film’s collections.

Karan said that Baahubali has collected a nett of 41 Crores across the country, while the combined nett collections of Telugu, Tamil and Malayalam versions is 80 Crores, taking the overall total to 121 Crores.