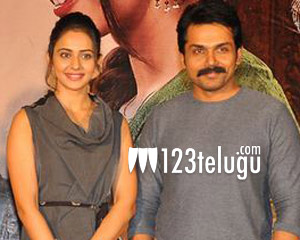 Tamil hero Karthi’s upcoming cop drama, Khakee is gearing up for November 17th release. On this occasion, the film’s unit has arranged a special press meet a while ago and shared their experiences.

Speaking to the press, Karthi said that Khakee will be a special film in his career as he worked for more than 2 years. He also added that he did a lot of research on this story and tried to keep it as raw as possible.

Rakul who is playing as the female lead in the film has also expressed her confidence in the film’s success.

Umesh Gupta, head of Aditya Music has produced this film and H Vinoth directs it.