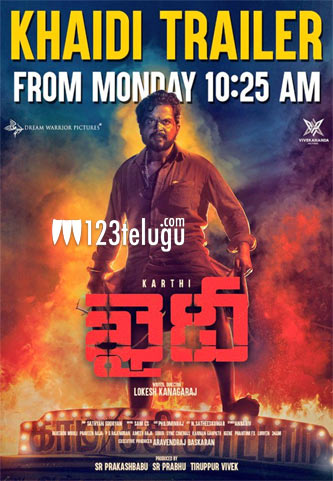 Karthi, who was last seen in Pandiraj’s Chinababu, is back with a hard hitting drama titled Khaidi. The film, directed by Lokesh Kanagaraj, is being produced by SR Prabhu, who had earlier bankrolled films like NGK, Khaki among others, under Dream Warrior Pictures.

The film’s trailer, which released in Tamil recently, received a solid response on social media, and now, the makers are planning to release the trailer for the Telugu version on Monday, October 14. The film has Karthi playing a convict and it is said to be one of his most hard hitting roles.

Khaidi’s Tamil version is slated for release on Diwali and an official announcement about the Telugu version’s release is going to be made soon.