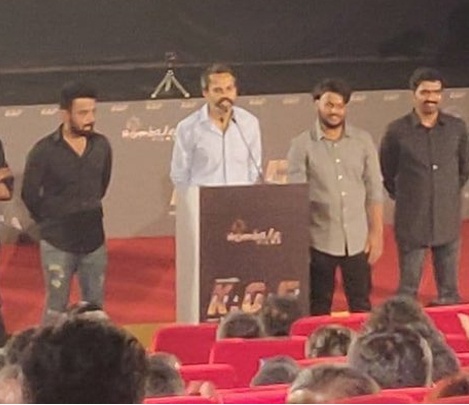 The theatrical trailer of Yash-starrer magnum opus, KGF: Chapter 2, has been released today at a grand event held at Bengaluru. The trailer has left everyone speechless and it has gained huge accolades from viewers.

Addressing the media, the movie’s director, Prashanth Neel has thanked each and every actor of the film. He also thanked the celebrities and the media for gracing the grand event. He talked about the eight years of hard work of the entire team for the franchise. Prashanth Neel has also asked them to come on to the stage.

The director has dedicated their 8 years of effort for both the movies and the sequel to the late Kannada star hero Puneeth Rajkumar. That’s a really sweet gesture from the director and netizens have been praising the director for it.

Produced by Hombale Films, the movie has Srinidhi Shetty, Rao Ramesh, Sanjay Dutt, Raveena Tandon, Prakash Raj and others in key roles. Ravi Basrur has composed the music for this pan-India movie, scheduled to release in theaters on April 24, 2022, worldwide.