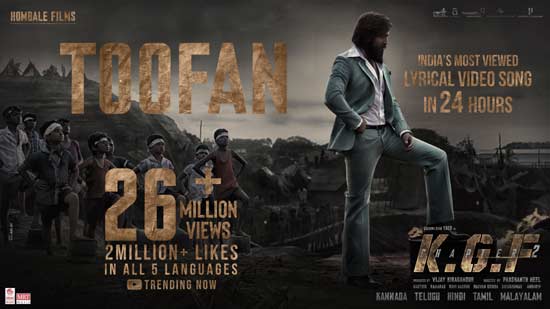 Finally, the long wait of fans and audiences has come to an end. Yash-starrer KGF: Chapter 2 is all set to hit screens on April 14, 2022. Ahead of that, the makers released Toofan, the first song from the movie yesterday.

The mass track, which was composed by Ravi Bsurur, became an instant hit and started creating new YouTube records. As announced by the makers, the song, including all versions, has been viewed more than 26 million times in 24 hours. With this, Toofan emerged as India’s most viewed lyrical video in a day. Besides, the song has also garnered more than 2 million likes.

Srinidhi Shetty, Sanjay Dutt, Raveena Tandon, Rao Ramesh, Prakash Raj and others are a part of this most-awaited movie. Directed by Prashanth Neel and produced by Hombale Films, the Kannada movie will be released in Hindi and other major South Indian languages.