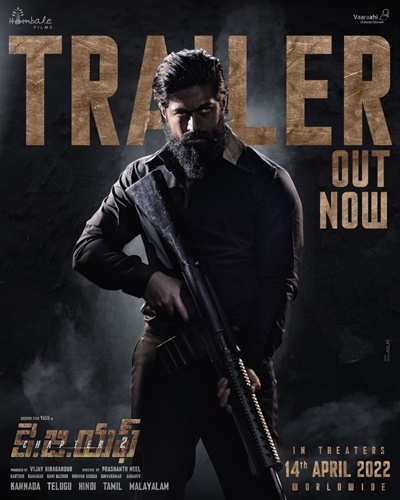 Finally, the most awaited moment is here today. Movie lovers across the nation are eagerly waiting for the theatrical trailer of KGF: Chapter 2 starring Yash as the protagonist. Directed by Prashanth Neel, the movie has Srinidhi Shetty as the leading lady.

At a grand event organised at PVR Orion Mall in Bengaluru, the makers have released the trailer. Mega Powerstar Ram Charan has unveiled the Telugu trailer through Twitter.

The trailer begins with the point where chapter 1 ended. Prakash Raj elevates about the then happenings in the war between Rocky, Adhira and Ramika Sen. The trailer leaves a solid impression on the audience and the visuals are top-notch and they will amuse everyone for sure. The director designs the key characters in a good manner.

The wonderful background score helps in making the trailer a huge hit. The dialogues of Yash, Raveena Tandon and Sanjay Dutt are extraordinary. The grand visuals and action sequences leave you awestruck for sure. To witness the ruthless war between the trio, we need to wait till April 14, 2022.

The movie has Srinidhi Shetty as the leading lady. Sanjay Dutt, Rao Ramesh, Raveena Tandon, Prakash Raj and others in key roles. KGF 2

Produced by Hombale Films, KGF 2 has music composed by Ravi Basrur. The makers have planned to release the movie worldwide in Kannada, Telugu, Tamil, Malayalam and Hindi.