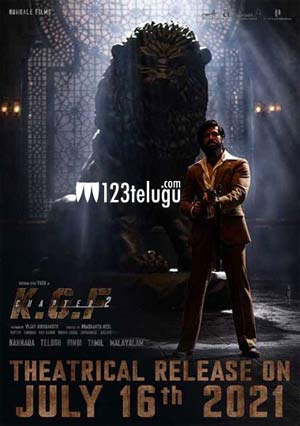 Sandalwood gangster drama, KGF Chapter 2, is undoubtedly one of the most anticipated movies in India this year. Following the humongous success of Chapter 1, the hype and expectations surrounding the Chapter 2 are massive across the country. The recently released teaser has set a new world record in terms of YouTube views

This unprecedented craze for a dubbed movie is resulting in record pre-release business deals across the twin Telugu states. According to the latest update, KGF Chapter 2’s Uttarandhra rights are ready to be picked up by leading distributors for a staggering Rs 16 crores. However, the makers are quoting Rs 20 crores so the deal is expected to be closed for around Rs 18 crores.

Also, the film’s Nizam rights may fetch more than Rs 40-45 crores. This is equal or even more than that of the price being offered to Allu Arjun’s Pushpa in the Nizam region. Apparently, the makers are eyeing at least Rs 120 crores by selling off the film’s Nizam, Ceded and Andhra rights. Needless to say, this craze is sensational and on par with some of the top league Tollywood stars’ movies.