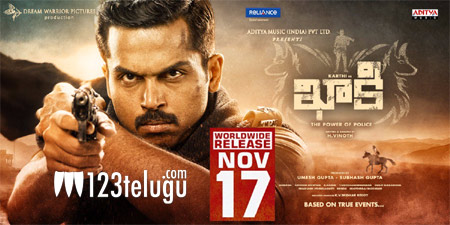 Karthi and Rakul Preet-starrer action thriller, Khakee, released on Friday to unanimous positive reviews and word of mouth. The film has exceeded all expectations and performed excellently at the box-offices in its opening weekend. Khakee ran to packed houses in most screens across the twin Telugu states on Sunday.

Though its a dubbed movie, Khakee is being received as a straight Telugu film. Audiences are appreciating the film’s plot and the way it is executed on-screen. Karthi’s riveting performance as a sincere cop has won a huge applause. Rakul Preet’s screen presence and her chemistry with Karthi is also being talked about.

Director H Vinoth has been praised by everyone for coming up with such a tight script and fabulous presentation. Khakee is being hailed as one of the best films this year. This is the first production of Aditya Music Pvt. Ltd and the producers are set to make huge profits as the film has been going very strong at the box-office.