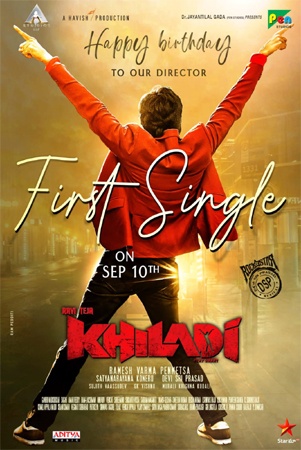 On the occasion of director Ramesh Varma’s birthday, the makers of Ravi Teja’s Khiladi today released a special promo to announce that the film’s first single will be released on September 10. Going by the promo, hotshot music composer DSP seems to have come up with a winning tune yet again.

The breezy and romantic promo features Ravi Teja and one of the film’s leading ladies, Dimple Hayathi. While Ravi Teja’s expressions are something not to be missed, Dimple as a girl next door looks sensuous in a sari. This is after a really long time that fans will get to see Ravi Teja in such a light-hearted role.