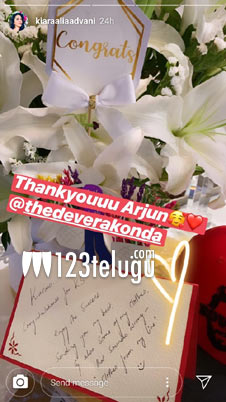 Kiara Advani is on cloud nine post the success of Kabir Singh, the Hindi remake of Arjun Reddy. The film, directed by Sandeep Vanga, has grossed more than Rs 100 crores in less than five days and it is expected to cross Rs 200 crores in the next few days since it is still drawing crowds in big numbers.

With the success of Kabir Singh, Kiara has become a hot property in Bollywood, and reports suggest that she has even hiked her remuneration post the film’s success. Meanwhile, the actress received a special gift from Vijay Deverakonda, who became a star with Arjun Reddy. In a personal note to Kiara, Vijay said, “Kiara, congratulations for Kabir Singh! Enjoy the success. Sending you my best and also some of my clothes…that sounds wrong – ‘clothes from my line’.”

Kiara, who was quite excited with Vijay’s gesture, thanked him and shared a picture of his note on her Instagram. The actress will soon be seen in Good News which also stars Akshay Kumar.