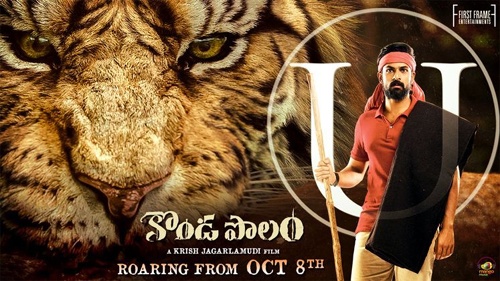 Young Mega hero Vaishnav Tej and Rakul Preet Singh’s rural adventurous drama, Kondapolam, is gearing up for release on October 8. The film has wrapped up its censor formalities earlier today and received a clean U certificate from the CBFC. The film’s recently released theatrical trailer has been getting a positive response from movie lovers.

Kondapolam is based on the book of the same title and penned by noted author Sannapureddy Venkataramireddy. The film is directed by Krish, while his father Saibabu J and friend Rajeev Reddy have produced it jointly. Veteran music composer MM Keeravani has composed the soundtrack. The film’s promotions will gain pace from now on.