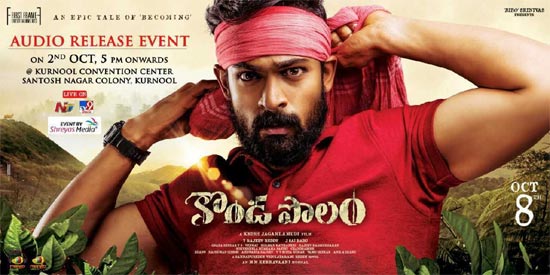 It is a known fact that Konda Polam is all set for a grand release on October 8th. The trailer of the film and two songs of the movie are out and have got superb response from all quarters.

Taking the musical promotions of the film to the next level, the team has announced a grand audio launch event tomorrow in Kurnool. Legendary Music Director MM Keeravani will perform live at the event.

Konda Polam will restart the trend of audio launch events in the Telugu film industry. Adapted from the novel written by Sannapureddy Venkata Rami Reddy, Konda Polam is produced by Saibabu Jagarlamudi, Rajeev Reddy and is presented by Bibo Srinivas.