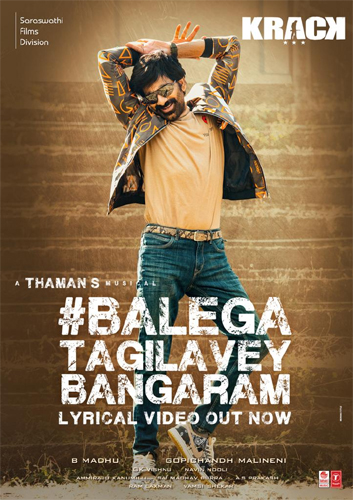 Balega Tagilavey Bangaram, the second single from Ravi Teja and Shruti Haasan’s Krack, has been released this morning. The song has cheeky lyrics penned by Ramajogayya Sastry and young composer Anirudh Ravichander adds energy to it with his trademark vocals.

The makers revealed a few glimpses of the song making in Goa. Raju Sundaram has choreographed the song in which Ravi Teja teases his lady love Shruti. This Thaman composition will be a fun addition to the film’s audio album.

Gopichand Malineni is directing Krack. The film also features Kollywood actress Varalaxmi Sarathkumar in a key role. Tagore Madhu is producing this intense cop action entertainer, which is slated for a Sankranthi release.