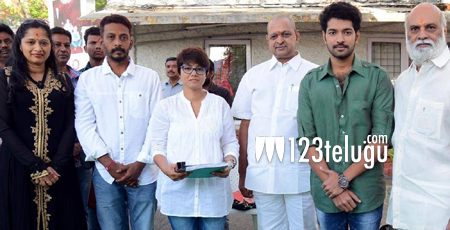 We have already reported that Annapurna Studios is presenting a romantic entertainer which is being directed and produced by female debutante Chuniya. She worked as an assistant to ace director K.Raghavnedra Rao for many films. Earlier, she directed Yuva,an opera on the small screen.

This untitled movie has kick started its shoot last month, and the unit has already wrapped up a busy schedule. Major part of the movie was shot in this schedule. Now, a new schedule will begin later this month, and with this, the entire shooting will be completed.

Karthik Raju, young and promising actor, whose debut flick Tippu is yet to release, is playing the lead role in this flick which has Sameera as the female lead. All the members of the unit are relishing their time while working under the lady director. Happening music director Anoop Rubens is composing tunes for this flick. Ali, Krishnudu, Viswa, Bharani and few others are playing important roles in this flick.