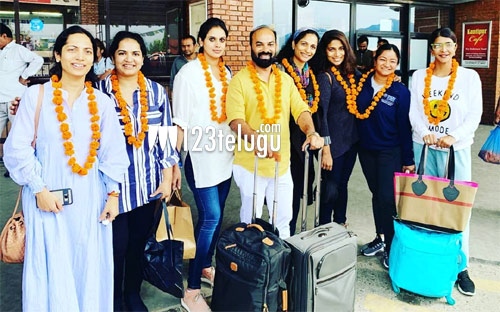 Lakshmi Manchu, who came back from Thailand after wrapping up the shoot of a reality show, has gone on a long vacation. This time, the actress was accompanied by Chiranjeevi’s elder daughter, Sushmita Konidela, apart from few other friends. It’s a well-known fact that Lakshmi Manchu is close to several other actors from leading film families, including that of Chiranjeevi, Suresh Babu, and also the Akkinenis among others.

The duo flew to Nepal few days ago, and from there, they went to Mount Kailash and Manasarovar lake, before heading to Lasha, Tibet. Lakshmi Manchu, in particular, is thrilled that one of her longtime dreams of travelling to the famous Potala Palace in Lasha, which was once home to Dalai Lama, has finally come true with this trip. Interestingly, it’s the third time that she has gone to Mount Kailash.

Apart from the ongoing Tv show in a leading Telugu channel, Lakshmi Manchu is said to be focusing on her other projects too which will be announced oon. Meanwhile, Sushmita is eagerly awaiting the release of Sye Raa Narasimha Reddy for which she was the costume designer.

My third yatra to the Manasarovar and Mount Kailash has begun. I'm so blessed to be sharing this journey with some of my beautiful friends who are all going for the first time. Bless us 🙏🏻🙏🏻. #harharmahadev #shambo #kailashmansarovar #mountkailash #manasarovar