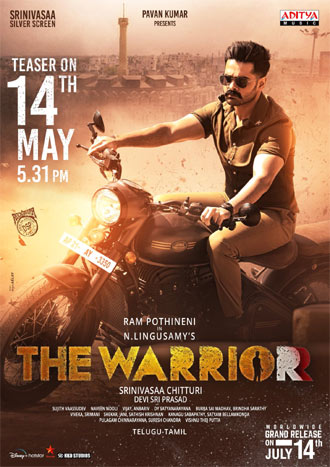 Energetic actor Ram Pothineni will be seen next in an action thriller, The Warriorr. Directed by Lingusamy, the bilingual film has Kriti Shetty and Akshara Gowda as the female leads.

Today, the makers took to social media and announced that the teaser of The Warriorr will be released on May 14, 2022 at 05:31 PM. The announcement poster looks good.

Produced by Srinivasaa Silver Screen, the Telugu-Tamil movie has Aadhi Pinisetty as the antagonist. Having Devi Sri Prasad as the music director, the movie is all set for a grand release on July 14, 2022, worldwide.