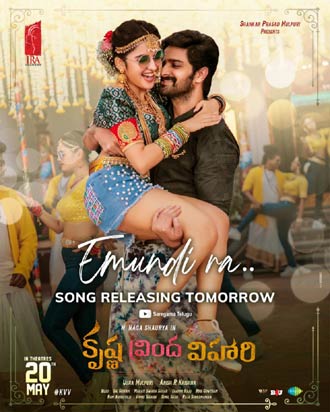 Young and promising actor Naga Shaurya is coming up with a romantic comedy entertainer called Krishna Vrinda Vihari. Directed by Anish R Krishna, the movie is in the news again.

Today, the makers have announced that Emundi Ra, the second song from the movie will be released tomorrow. However, they didn’t mention the time of release. Composed by Mahati Swara Sagar, the song is billed to be a romantic track.

Shirley Setia will be seen as the love interest of Naga Shaurya in this movie. Yesteryear actress Radhika Sarathkumar will be seen in an important role in the movie, produced by Usha Mulpuri under Ira Creations. The movie is locked to hit screens on May 20, 2022.