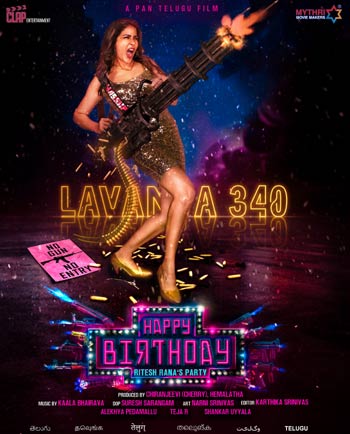 A new film of the lovely actress, Lavanya Tripathi, has been officially announced on the occasion of her birthday. To our surprise, the film is titled, Happy Birthday.

The makers have released the first look of the film in which Lavanya, who is in partywear, holds and fires a big machine gun.

Produced by Clap Entertainment and Mythri Movie Makers, the movie is directed by Ritesh Rana, well known for his debut film, Mathu Vadalara.

Naresh Agastya, Satya and Vennela Kishore are also playing key roles in this film, which has Kala Bhairava’s music.