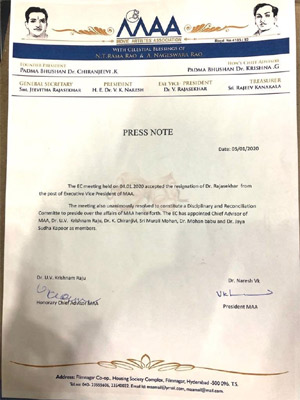 It was quite a dramatic set of events that let to a war of words and eventual resignation of actor Rajasekhar from his position as Executive Vice President, two days ago.

Finally, MAA has released a press note stating that they have accepted the same. Sharing that they have resolved to constitute a Disciplinary and Reconciliation committee to preside over the affairs of MAA henceforth.

Veteran actor Krishnam Raju has been appointed the Chief Advisor. In fact, the new press note was signed by him as well alongside president Naresh.

Chiranjeevi, Murali Mohan, Mohan Babu and Jaya Sudha have been appointed members of this new committee.