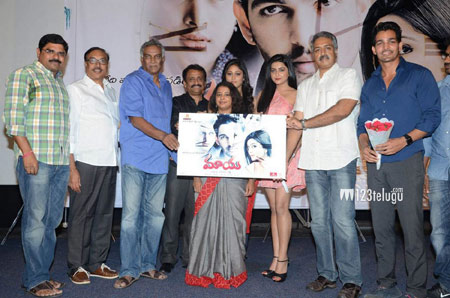 Neelakanta is one of the few directors in Telugu who has the credit for making several off-beat films over the past 12 years. Except for Chammak Challo, he has stayed away from making commercial cinema and with films like Show, Virodhi and Missamma, he has carved a niche for himself.

His latest film Maaya is gearing up for release later this year and it stars Harshvardhan Rane, Avanthika, Sushma Raj and Nandini Rai in lead roles. The film’s first look was launched earlier today in Hyderabad and producers like K L Damodhar Prasad, Ram Mohan and Tammareddy Bharadwaj graced the event. Dr MVK Reddy and Madhura Sreedhar have produced the film.

Speaking to the media, Neelakanta said, “I wrote the story of Maaya even before I made ‘Show’ and I must add that it’s my dream project. The film is based on the concept of extra-sensory perception and the hero’s character can predict what’s going to happen next. Harshvardhan is a fine artist and in this film he’s playing the role of a fashion designer. It’s will be an edge-of-the-seat mystery thriller.” Sekhar Chandra has scored the music and Balreddy is the cinematographer.